Suzanne Benton graced a new evolution of Woman in the 21st Century: Margaret Fuller and the Sacred Marriage with her opening Mask Tale performance.  This time it was Ariadne who led Thesius through the labyrinth with her ball of yarn and a sword.

The Ariadne selection was Suzanne’s suggestion, when I appeared at her home on the way to a James Maddock’s St. Patrick’s Day  concert.  I then became enthralled with the entourage of the  Dionysius of lower Manhattan.

This myth took me full circle back to my journey through the labyrinth of the Stamford Loft Artist building in November, 1997.  Eros was guiding me as though by an invisible  red thread and I was brandishing a sword to cut to the Truth.  I was on my first art assignment to find signs of a renaissance.

There I discovered Michael Manning and his mythological painting of “Minotaur.”  Michael will do a shamanic performance in the gallery with me on August 17th at 7 pm. 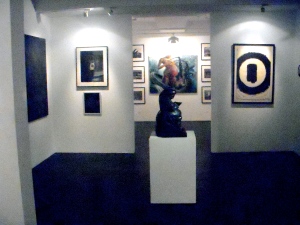 What would a triumph in slaying the minotaur (my own ego) mean?  Could it signify a reinvention of criticism as interpretation — or a filter between the collective unconscious and collective consciousness?

All I know, is what led to this full circle of myth and symbol– Ariadne with the Ouroboros — resulted in my being “swept away” by the warrior Thesius.

The result is the end of my trilogy of exhibitions this summer, with all its iconic imagery of birth and the crown of the sacred marriage.  Here we have, in the last goddess civilization of the Minoan, the remnants of the ancient myth of Inanna’s descent — with its seven stages marked by the Moon/Venus  conjunctions — and ascent to the sacred marriage.  The seven stages are represented here by the sacrifice of seven Athenian men and woman to King Minos and ending of the myth in which her wedding diadem was set in the heavens as the constellation Corona.

She remained faithful to Dionysus, but was later killed by Perseus at Argos. In other myths Ariadne hung herself from a tree, like Erigone and the hanging Artemis, a Mesopotamian theme. Some scholars think, due to her thread-spinning and winding associations, that she was a weaving goddess such as Arachne, and they support the assertion with the mytheme of the Hanged Nymph (see weaving in mythology).

The  symbols of the thread and the hanging from a tree (Inanna’s rotting green body hung on a meat hook) represents the inner journey we must travel to uncover the more ancient myth which reveals the essence of the authentic feminine which has been buried for centuries.

And this is how it played out for me.  In following the signs in Manning’s Minotaur as the first in a long train of symbolic works, I went inward through the labyrinth to encounter the ancient myth of Inanna, which has provided a system of sacred geometry for connecting with the true face of the feminine. 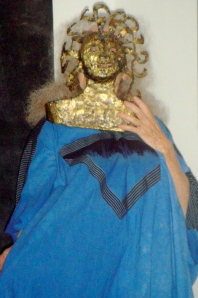 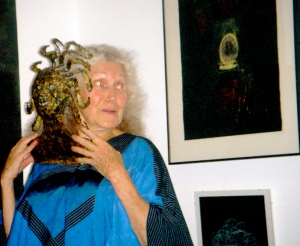 Karl Kerenyi (and Robert Graves) theorizes that Ariadne (whose name they derive from Hesychius‘ listing of Άδνον, a Cretan-Greek form for arihagne, “utterly pure”) was a Great Goddess of Crete, “the first divine personage of Greek mythology to be immediately recognized in Crete”,[7] once archaeology had begun. Kerenyi observes that her name is merely an epithet and claims that she was originally the “Mistress of the Labyrinth“, both a winding dance-ground and in the Greek view a prison with the dreaded Minotaur at its centre. Kerenyi notes a Linear B inscription from Knossos, “to all the gods, honey… to the mistress of the labyrinth honey” in equal amounts, suggesting to him that the Mistress of the Labyrinth was a Great Goddess in her own right.[8] Professor Barry Powell has suggested she was Minoan Crete’s Snake Goddess.[9]

One thought on “Full Circle: Ariadne”