In conjunction with the current exhibition:

Woman in the 21st Century:

Margaret Fuller and the Sacred Marriage 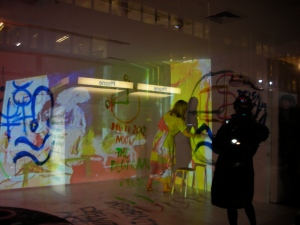 Lisa Paul Streitfeld is a cultural writer, metaphysician, curator, shamanic performance artist, educator and pioneer of new art forms for the 21st century.  Her innovations in expression occur at the intersection of new technology with business, metaphysics and fine art.  While writing on Internet innovations, she was a regular critic for Tribune newspapers in the New York metropolitan area, interpreting a new movement in over 300 reviews and articles. Ms.Streitfeld was a recipient of the 2006 UUWF Margaret Fuller Award for a 21st century theology of the hieros gamos.

Lutz Rath is a multimedia performer and composer who combines the avant-garde with a firm foundation in classical tradition.  He has performed around the world with orchestras and his spoken rendition of Kurt Schwitter’s Dada composition, Ursonate, has been incorporated in numerous performances.  A native of Germany, Mr. Rath has been Music Director of the Washington Square Festival for several years and was formerly a member of the Munich Philharmonic Orchestra.  Recently, he was appointed executive director of the Music Festival of the Hamptons. For a decade he was the cellist of the International String Quartet, which won the Grand Prix in the International Chamber Music Competition in Evian, France.

Michael Manning is a mythological black belt painter creating narratives surrounding the birth of a new cosmology.  This is his fourth painting performance collaboration with the exhibition curator.  Working on issues of morality and justice, he creates stories from an individual point of view but with universal significance and meaning.  His focus is the central archetypal figure of the hero upholding a morality rooted in gender balance.

Tatyana Stepanova is a mystical black belt multimedia artist with training in linguistics.  A native of Siberia, her painting bridges east and west to incorporate a universal mythology with personal narrative arising from her transnational feminine experience.  With her Project Birch Forest currently at White Box, Ms. Stepanova champions cross-disciplinary art forms interconnecting the natural world with the cosmos