The exhibition then traveled to New York City, to open on August 4, with a performance painting salon. Another salon hosted the performance of Suzanne Benton, renowned for her mask journeys.

You can find the original press release for the exhibition here.

The blog was transformed into a website under Covid-19 in the spring of 2020 to realize the conclusion of a project that was launched with a 2006 Margaret Fuller Award from the Unitarian Universalist Woman’s Federation.

The award was for $3000, a future that was crucial to the hermeneutics of Margaret Fuller, who advocated the internal sacred marriage of the opposites with the extraordinary clue of her authentic religious orientation right in plain site on the frontispiece of her seminal book, Woman in the Nineteenth Century. 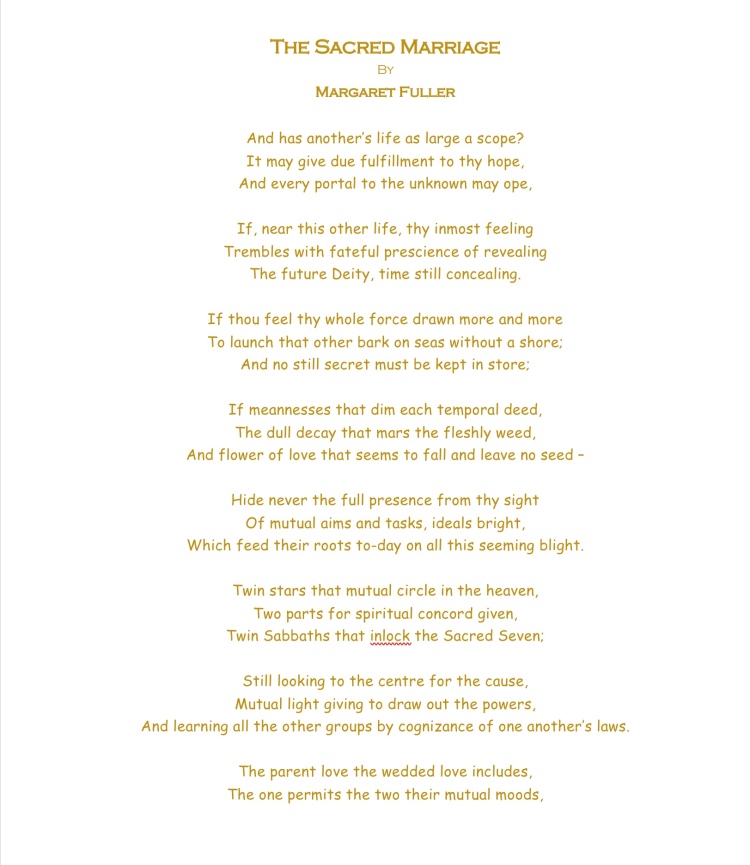 This unknown source of the birth of an American literature through its Mother, the nurturer of numerous literary talents in her role as editor of Emerson’s The Dial.

The number 3 was the clue in my grant award as to my future direction as a scholar mining such legends as Margaret Fuller and the Templar Treasure: the passage of the Third in my development of a theorem via an Event in the summer of 2014 in the Saas-Fee Media Lab.

My announcement of The Event: The Third in the Huffington Post on September 9, 2014 would begin a new trek. This required that I remain faithful to the Event so that the disclosure could take place. Indeed, it did …to the point if bringing my archeology of origins to a 21st century icon to a conclusion at this writing.

The new technology provided by WordPress allowed for an expansion of the blog into a website. The thirds provided by the template triggered the concept of trilogies as an organizational apparatus for my tower of manuscripts written from 1984-2019. Only two were self-published as books, one in a print run and the other as print on demand.

HOLY BRIDE/HOLY GRAIL is therefore an ongoing narrative passage yo the holy wedding presented in three chapters: Woman in the 21st Century (2007), Anatomy of an Icon (2008) and Twin Flames, Soul Mates & the Holy Grail (2010)

This website is therefore a companion to my other website originating in a blog, AQUARIAN CONVERSIÓN, begun in 2012, and now offers the Aquarian Conversión trilogy of meta novels: Champagne Tango (1986), Astara is Born (1987) and Wolf in the Bottle (1992).

Yet another trilogy, AQUARIUS RISING (2016-2020), presents further scholarship woven into a meta journey disclosing the 21st century icon above/below and within/without. The title in this trilogy are: Übermensch: Nietzsche, Salome & the Ages of Aquarius (2016), The Aphrodite Coverup (2017) and The Ultimate Road Trip: #MeToo to #WeToo (2019).

The most recent trilogy STILLNESS was created just as a website to disseminate my newly published texts: Kundalini Handbook, Six Golden Rules and Descent to the Icon.

In effect, the technology missing at the time that I started this immersion into text wishing there was an easy way to deepen the surface through the addition of actual visual symbols and the drilling down into layers of pages adding depth now possible through digital technology.

This wedding of image and words is therefore made possible by the ultimate developments that makes it possible for me to design my own website without having to learn code.

If I wasn’t an astrologer, I could provide this as an explanation, along with the Covid quarantine, of why this 27 year project has finally come to a conclusion.

Yet, my knowledge of the cosmic patterns, confirmed by the intuition that this corpus is ready for birth, reveals that this a Great Pause is providing humanity with the preparation to an exciting new culture — the long-anticipated Age of Aquarius in which these quantum experiments will thrive