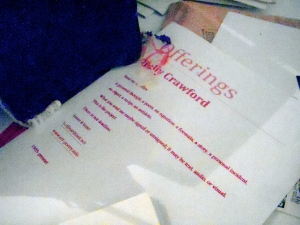 Who will offer? What to whom?

This is the first physical installation of my project.  You may touch if you put on the white cotton gloves.  That is the sacrifice that I’m asking from you. Is it sacred?   Is it fragile?  It is an altar to connectedness.

Send of leave me an offer.

Narratives, both the personal and  the meta connect us. Where to they intersect?

This project was started in 1992 with my research, writing and printing of the booklets that chronicle some of the thoughts and achievements of women. I started my text with the passage of the ERA in 1971. In the back I suggested an installation.

I have placed many copies of that booklet around the table.  They’re free. Participation and free are the hallmarks of many of my projects. They also cross boundaries and are hard to define.

Over the years I have asked people for offerings in mass media, on the net, though the mail, and with printed cards.

Send me an offer: A personal thought, a sound, a poem, an equation, a formula, a story, a personal incident, recipe, an object or anecdotes.  Something you want to offer or be offered.

Some people I knew, but many I did not.  Over the years I have uploaded images and texts on line.  It may be viewed at www.art-poetry.info

In 1995 asked people, many random, and some I knew to read other peoples offerings. The reading was an offering.  I made a tape. That media is now archaic. It was played as part of the Fray by Christine Palma and aired on  KXLU in Los Angeles.

Many offering were sent by mail. That now seems quaint and archaic.

This project was a .net participant in Ars Electronica in 1997.

In 1999, Kay Turner wrote about my project in her book, “Beautiful Necessity, the art and meaning of women’s  altars.”   Her comments could only focus on the .net. 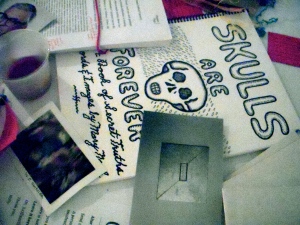 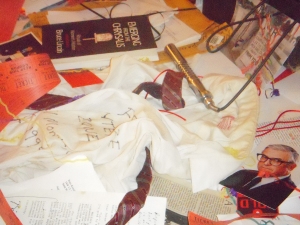 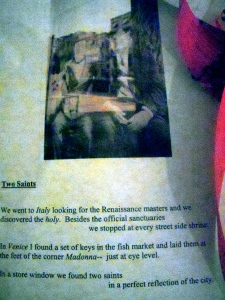